What are you looking for?

Tell us what you're looking for...
Want to Run Your Own
My Guide Website?
Find Out More

What might surprise you are just how many temples the city has.

Iconic Bangkok sights; sparkling symbols of Thailand's rich culture and Buddhist beliefs; spectacular architecture and amazing décor; and a fascinating insight into the true heritage of the land. Bangkok's stunning temples glitter in the sunshine against the ever-blue skies; a reminder that in this modern-day metropolis there is a deep rooted sense of tradition and philosophy that is entwined in the everyday lives of the Thais. Bangkok's temples are a reflection of what makes the city and the rest of Thailand so enticing, charming and intriguing. What might surprise you are just how many temples the city has, but if you're short on time, here are five which are definitely worth a visit.

A temple that is deeply connected to Thai Royalty, being the temple where the royal ceremony of making merit takes place, Wat Phra Kaew is also a pilgrim site for Buddhists throughout Thailand. The temple is home to the greatly revered Emerald Buddha and is a temple must-see not only because of its regal status but also because its glittering architecture is truly beautiful.

The Emerald Buddha is carved from a jade stone and is just 66 cm tall. It is housed high up in a golden shrine and has been in-situ at Wat Phra Kaew since 1782 when King Rama I consecrated the grounds, after passing through the country and other countries in Southeast Asia.

It is believed that the Indian saint Nagasena prophesized that the Emerald Buddha would bring prosperity to the country it resided in, as a sacred protector, as well as bringing good fortune to Thai people and granting wishes.

Wat Phra Kaew has grounds incorporating 100 buildings and attracts interest because of its history and modern-day reverence, as well as mesmerizing architecture of old Siam. 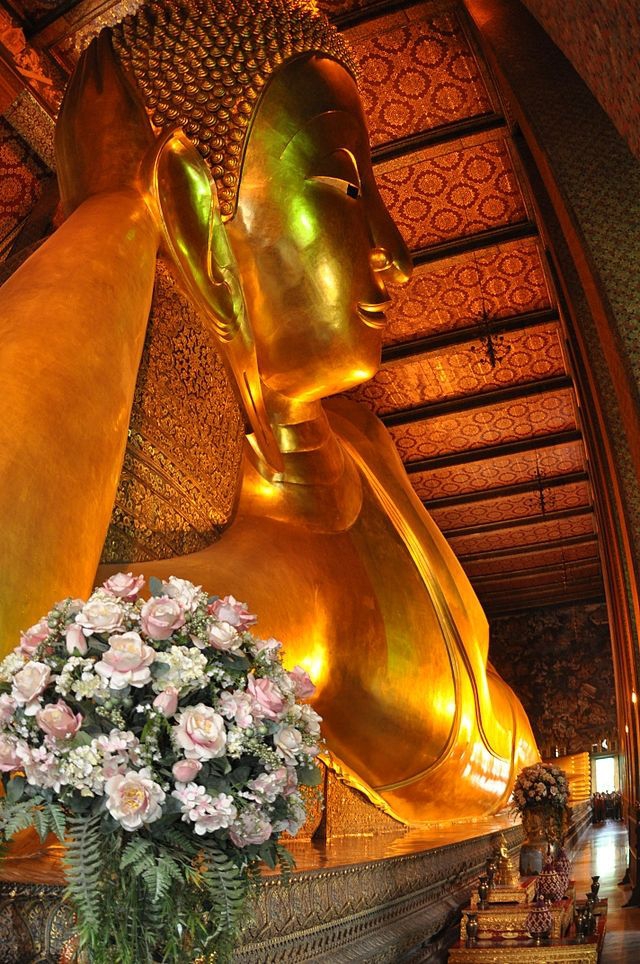 Considering its location right next to the Grand Palace, Wat Pho has a wonderfully serene air, especially if you wander off further into the grounds, exploring the 91 chedis. There are so many Buddha images here that you can happily spend a good couple of hours sitting, walking and soaking up the history and the atmosphere of one of the oldest temples in Bangkok.

What really makes Wat Pho stand out is not just its size but the spectacular 160ft reclining Buddha which is known throughout the land. You can walk around the Buddha, marveling at the detail such as the beautiful mother-of-pearl inlays on the soles of the Buddha's feet. You can also drop coins into 108 bronze bowls running around the walls, which are said to represent the auspicious characters of Buddha. Donations are believed to bestow good fortune and also serve to help the wat and its monks.

Wat Pho is also home to a renowned massage school and you can have a Thai massage in the temple grounds too, either indoors or out, making your visit to Wat Pho a relaxed yet stimulating mind-body experience.

If you are staying on the main city-side of the Chaophraya River, then before or after your visit to Wat Arun don't forget to take a classic Bangkok snap of the temple right by the river banks, across the water.

It is believed that the Temple of Dawn is so-named after King Taksin passed the temple after the fall of Ayutthaya in the 18th Century at dawn, promising to restore the sight. Another belief is that the temple is named after the Indian god of dawn, Aruna, to symbolize the dawning of a new capital.

The riverside setting definitely adds to the beauty of Wat Arun but what also makes it stand out is its Khmer fashioned stupa which reaches over 80 metres high into the sky and is covered in colorful porcelain pieces which glitter in the light. Wat Arun has become a symbol of not just Bangkok but the whole of Thailand.

You may see people worshiping at Wat Arun, in the hope of eternal happiness by walking around the stupa or prang three times. This is done in a clockwise direction holding incense sticks and candles. 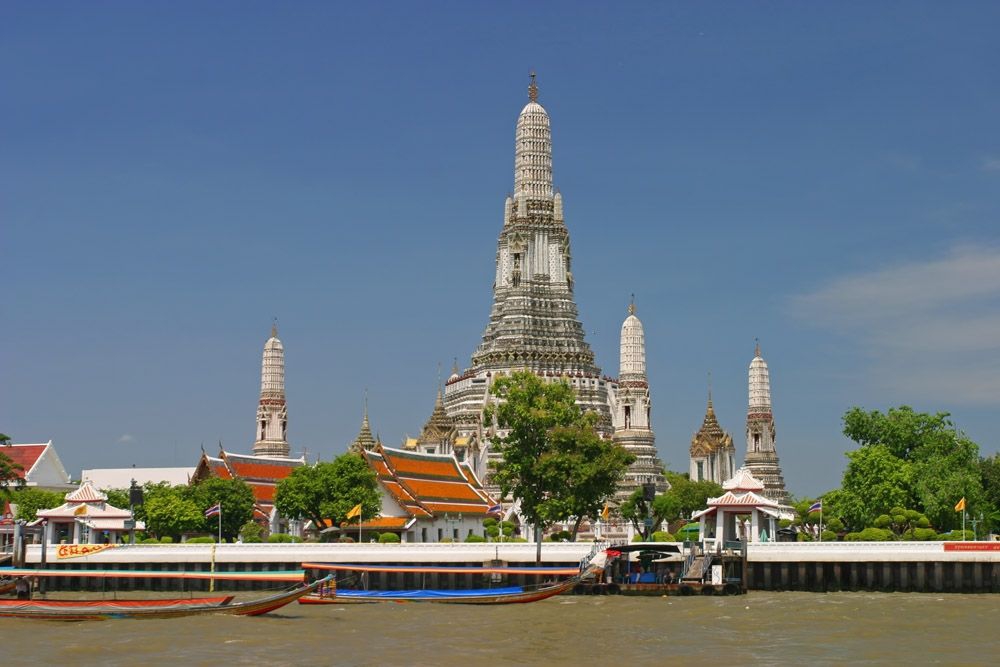 Known as the Marble Temple, Wat Benchamabophit, founded over 100 years ago by King Rama V, is perfectly situated in the relaxed green environs of Dusit, not far from the attractive Chitralada Palace.

The architecture encompasses the classic sweeping gables of many Thai temples, but what makes Wat Benchamabophit unique is that it is made out of Italian marble, with European design features such as stained glass. The temple doesn't have any soaring chedis but with its marble pillars and courtyard with Buddha images, as well as cloisters, it is an impressive sight.

Being away from the main tourist area, Wat Benchamabophit is a perfect temple to visit for total tranquility and some wonderful photo opportunities 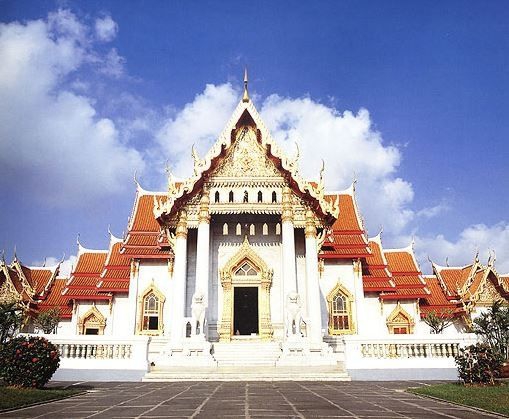 Located in Bangkok's Chinatown, by the train station at Hua Lamphong, Wat Traimit is a 13th Century temple that has a rich story to tell, for here is housed one of the largest gold statues in the world.

The Golden Buddha weighs 5.5 tons and is nearly four metres high and three metres wide; and yet for many years it was believed to be nothing of the sort. Legend has it that the Golden Buddha was disguised with a stucco covering and moved to a remote temple to protect it from pillagers during attacks from the Burmese in the 18th Century. And so it remained for nearly 200 years.

During the 1950s, and now at Wat Traimit, a crane moving the statue dropped it and a crack appeared. Inside was a lacquer coating and under this was revealed the incredible Golden Buddha, which is believed to promise an auspicious life to those who live their lives with a pure mind.

Even the classic curves of sparkling temple roofs are a sight to behold. Bangkok's temples take you into the heart and soul of Buddhism and the Thai people; exploring age-old traditions and customs that continue to live on in the vibrant capital. 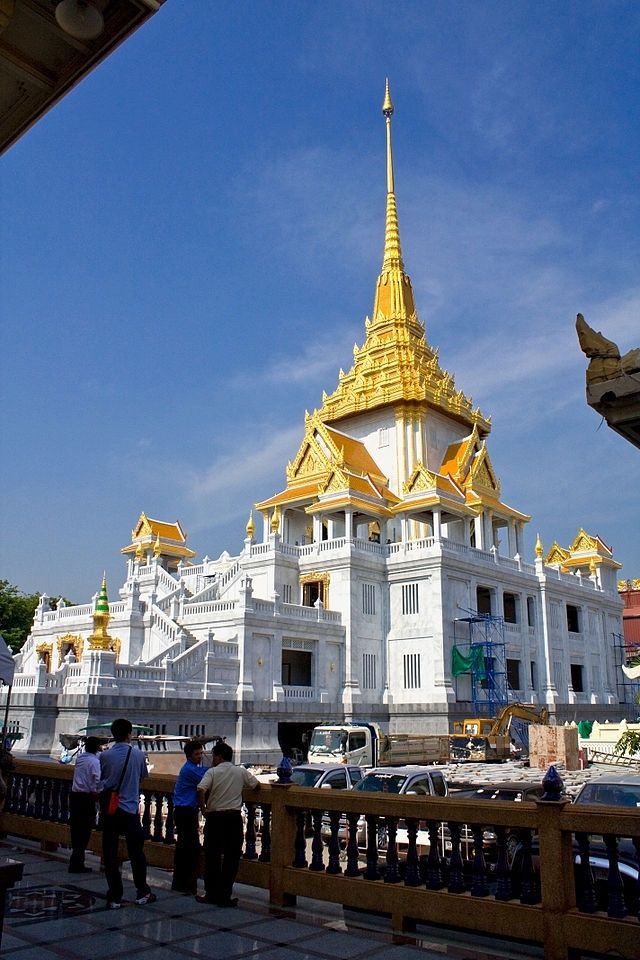