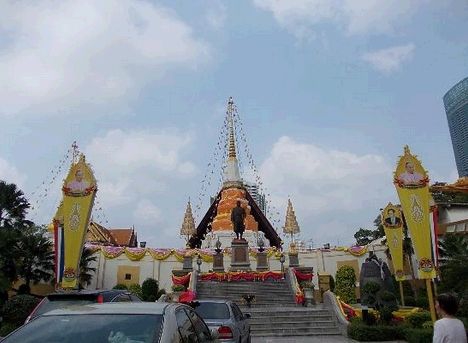 Wat Yannawa is a royal temple near Taksin Bridge, with the current site built in the early 19th century. Although it attracts a steady stream of tourists, the temple is actually most popular with locals, with a history of Chinese visitors from nearby neighbourhoods. This may be in part due to the temple's unique feature of a very unusual-shaped wiharn (praying area), which appears as a full sized ship.

Wat Yannawa, also known as 'The Boat Temple', is not shaped like any old boat. The design is based on the traditional Chinese junk, a sailing vessel which helped build and sustain the kingdom's prosperity for hundreds of years. King Rama III, seeing steam ships beginning to replace the junks, was worried a great part of the region's history would be forgotten, and ordered a replica ship to be built as a temple. The boat is constructed out of concrete, with two pagodas instead of masts, and an altar in the wheelhouse.

Wat Yannawa is a short walk from the Taksin Bridge Skytrain station. Turn right at the Charoen Krung exit, and find the large temple gatehouse after only a few minutes walk.

All of our providers offer 24/7 support