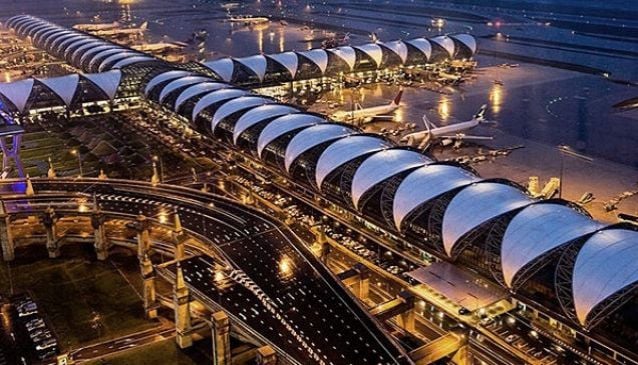 Suvarnabhumi is the main hub for Thai Airways International, Bangkok Airways and Orient Thai Airlines. It serves many European and American carriers too. This is the fourth largest single building airport terminal in the world with over 6,060,000 square feet of space. It is the fourteenth busiest airport in the world and the sixth in Asia. It has had over 53 million passengers pass through it's gates in 2012 and is also a major air cargo hub with 3 million tonnes of cargo per year. Suvarnabhumi is one of the world's most photographed airports.

A breathtaking airport with beautiful landscaping. The interiors of this airport has a a special play area for children and inspiring artwork like the Samudra Manthan. It has a 5 level car park building with a capacity of 5400 cars at one time. Pass through Suvarnabhumi international airport and experience for yourself the reason it is one of the famous airports in Asia.