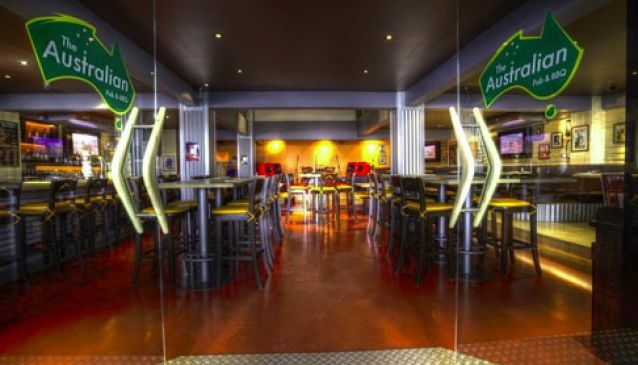 Directions to The Australian Pub & BBQ

Bangkok's first Aussie pub has arrived to provide fresh competition with the numerous Irish and Pommie pubs dotted around the city.

Proud to be the first pub in Thailand to offer Foster's, as well as other traditional Aussie beers such as VB, Coopers and Crown lager. The pub boasts a specially made cold room which is set to -5 degrees to make sure every beer they serve is a perfect temperature.

Traditional Aussie pub grub such as meat pies, Vegemite sandwiches and classic bar snacks such as chicken wings, onion rings and shrimps fresh off the barbie are delivered bursting with flavour. All day breakfasts are also available including the wacky creation 'Australian Egg Mess'.

There is an outdoor decking area for alfresco dining or simply people watching. But the best thing about this place is the second floor. With nine flat screen TV's and two extra large projector screens you won't miss a second of any sporting action. Live English football, rugby and Aussie Rules Football are shown live daily. With a lively atmosphere to match the stadiums themselves, if you're a sports fan this is the place to be.